More than thirty years after the German-Polish Neighbourliness Treaty, relations between Berlin and Warsaw are at the crossroads: Issues such as energy supply, arms deliveries to Ukraine, the rule of law and demands for reparations dominate the German-Polish agenda - enough reasons for more than 220 participants to take part in a full-day German-Polish dialogue on Tuesday 29 November. 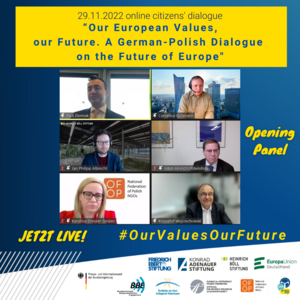 The podcast episode "The German-Polish Relationship: It's complicated" based on the event is available here.

Already at 9:00 a.m., Cornelius Ochmann, Member of the Management Board of the Foundation for Polish-German Cooperation, kicked off the German-Polish dialogue "Our European Values, our Future. A German-Polish Dialogue on the Future of Europe" with the opening panel. Under his moderation, Jan Philipp Albrecht, Co-President of the Heinrich-Böll-Stiftung e.V., Karolina Dreszer-Smalec, President of National Federation of Polish NGOs, Jobst-Hinrich Ubbelohde, Secretary of State for European Affairs in Brandenburg, Dr. Krzysztof Wojciechowski, Founder and Director of Collegium Polonicum, and Paul Ziemiak, Member of the German Bundestag and Chairman of the German-Polish Parliamentary Group, discussed topics such as government cooperation both on the national and regional level, citizen life across borders, security policy and the mission of the civil society. Building on this debate, Dariusz Pawłoś, Ambassador of the Republic of Poland to Germany, then approached the participants of the dialogue in a keynote speech. He formulated the expectation that the exchange on a social, cultural and regional level must be strengthened. Especially, he identified German and Polish youth as the driving force of the future of Europe and German-Polish relations.

Based on the previous discussion and initial ideas on how to improve German-Polish relations, three specific sessions on "Civil Society, Youth and Culture", "Economy and Climate" as well as "Foreign and Security Policy" took place from 10:15 a.m. onwards.  All three units followed the coming structure: After two or three introductory speeches, the participants had the opportunity to discuss with each other in breakout sessions supported by two experts each. After returning from the breakout sessions, the sessions were concluded by a short presentation of the results in plenary.

Within the framework of the session "Civil Society, Youth and Culture" Dr. Hanna Machińska, Deputy Human Rights Commissioner of Poland, Dietmar Nietan, Member of the German Bundestag and Coordinator of German-Polish Intersocietal and Cross-Border Cooperation, and Urszula Zielińska, Member of the Polish Sejm and Co-Chair of Partia Zieloni, gave introductory speeches, where Nietan emphasised the importance to support bilingual speaking, to be ambassadors simultaneously in both civil societies. Machińska and Zielińska highlighted the impact of the Russian war of aggression in Ukraine on the perception of Germany in Poland. On the one hand, Zielińska described the disappointment of young people in particular due to the hesitant support from Germany for Ukraine. On the other hand, Machińska called for a greater commitment, also at the level of civil society, to provide more support for refugees on the Polish-Ukrainian border. The breakout sessions that followed generated the subsequent ideas and demands: 1) more and closer cooperation of German and Polish grassroot movements; and 2) more funding for informal education projects in Poland and Germany.

The session “Economy and Climate” was mainly influenced by the introductory speeches of Klara Geywitz, Federal Minister for Housing, Urban Development and Building of Germany, and Prof. Dr. Sebastian Płóciennik, Chief specialist and Analyst for the German Economy at the Centre for Eastern Studies and Professor at Vistula University. Minister Geywitz addressed mainly the role of cities and buildings in achieving the goal of carbon neutrality. Płóciennik focussed in his speech on the crisis of globalisation and changing patterns of globalisation with all its implications for Germany and Poland. Last but not least, the following ideas and demands were developed in the breakout sessions of the unit: 1) stop buying fossil fuels from authoritarian regimes: and 2) more education at schools but also companies how to reach carbon neutrality.

The third and final session on "Foreign and Security Policy" was opened by three introductory speeches by Dr. Kai-Olaf Lang, Senior Fellow at German Institute for International and Security Affairs (SWP), Bogdan Klich, Senator and former Polish Minister of National Defence, and Prof. Dr. Ireneusz Pawel Karolewski, Professor of Political Theory and Democracy Research at University of Leipzig. Lang addressed that the multilateralism and the rules-based favoured order of the European Union were increasingly questioned in recent years. However, in times of global crisis caused by the climate change, it remained unclear how to include authoritarian regimes in the fight against climate change. Instead, Senator Klich focussed on the challenge of the European Union of establishing a security union, while Karolewski elaborated on two structural problems of German and Polish foreign policy – on the one hand, the economisation of foreign policy in Germany and on the other hand, the domestification of foreign policy in Poland. The participants of the breakout sessions came up with the following demands: 1) empowering the European Parliament, also in the field of foreign and security policy; and 2) strengthening the relations to the US as a security anchor in Europe.

After these three intense sessions, Karolina Dreszer-Smalec, President of National Federation of Polish NGOs and representative of the organisers, pointed out the importance to distinguish between the relations at the governmental level and at the level of civil society and citizens. In her closing remarks at the end of the event, she also referred to the follow-up process of the event. Therefore, the participants‘ ideas and demands will be considered in a future paper about German-Polish relations, which will be published in 2023.

The podcast episode "The German-Polish Relationship: It's complicated" of our new podcast "Europa im Dialog", based on the opening panel and produced by Vincent Venus, is available here. Recordings of the introductory speeches can be found here.

The opening panel and the plenary sessions about „Civil Society, Youth and Culture“, „Economy and Climate“ and „Foreign and Security Policy“ were moderated by Cornelius Ochmann, Member of the Management Board of the Foundation for Polish-German Cooperation, Dr. Bartosz Machalica, Co-Founder of the Ignacy Daszyński Centre, Marcin Antosiewicz, Vistula University, and Jolanta Szymańska, Head of the European Union Programme at the Polish Institute of International Affairs. More detailed information on the complete programme as well as the almost 50 experts and moderators of the overall event can be found here and here. Short reports and photos live from the event are provided on our social media channels: Twitter, Facebook and Instagram.

A broad and open dialogue is important to us, which is why we are working with a wide range of partners from politics and civil society. The event is part of the citizens' dialogue project "Europe - We need to talk!"  and was organised in cooperation with the Friedrich-Ebert-Stiftung e.V., the Heinrich-Böll-Stiftung e.V., the Konrad-Adenauer-Stiftung e.V., the National Federation of Polish NGOs (OFOP), the Bundesnetzwerk Bürgerschaftliches Engagement (BBE), the Foundation for Polish-German Cooperation and the Collegium Polonicum. Moreover, it was supported by the Press and Information Office of the German Federal Government. Further information on our nationwide (online) citizens' dialogue series "Europe - We need to talk!" can be found in German here.